THE PORT OF CIVITAVECCHIA.

ROME AND THE VATICAN TOUR:

Will stop at first at the Colosseum, where you can just walk around for pictures or a visit inside (avoiding line).

From the Colosseum will keep driving to the Circus Maximus (stop), Palatine Hill view (stop), then Capitoline Hill (stop) overlooking the Roman Forum, Venice Square with the "Wedding Cake", the Pantheon with a stop to visit it inside, the Trevi Fountain (stop) and the Spanish Steps driving by.

Time for lunch (not incld) and then will visit the Vatican (Vatican Museum with the Sistine Chapel) and St. Peter's Basilica. Possibility to hire a licensed guide to visit it with an extra cost.

At the end of the Vatican visit will drive you back to Civitavecchia Port where you will arrive around 05.00 p.m.

Rome (English pronunciation: /roʊm/; Italian: Roma, pronounced [ˈroːma]; Latin: Roma) is the capital of Italy and the country's largest and most populated municipality (central area), with over 2.7 million residents in 1,285.3 km2 (496.3 sq mi), while the population of the urban area is estimated by Eurostat to be 3.46 million. The metropolitan area of Rome is estimated by OECD to have a population of 3.7 million.
It is located in the central-western portion of the Italian Peninsula, on the Tiber river. The city has been one of history's most powerful and important centres, being the home of the emperor during the Roman Empire and the Italian government. The city also has a significant place in Christianity and is the present day home of the Roman Catholic Church and the site of the Vatican City, an independent city-state run by the Catholic Church. Due to this, the city has often been nicknamed "Caput Mundi" (Latin for "Capital of the World") and "The Eternal City". Also, Rome is widely regarded as one of the world's most beautiful ancient cities.

Rome's history as a city spans over two and a half thousand years, as one of the founding and most powerful cities of Western Civilisation. It was the centre of the Roman Empire, which dominated Europe, North Africa and the Middle East for over four hundred years from the 1st Century BC until the 4th Century AD, and during the Ancient Roman era, the city was the most powerful in Europe. During the Middle-Ages, Rome was home to some of the most powerful popes, such as Alexander VI and Leo X, who transformed the city into a modern centre of the arts and one of the major centres of the Italian Renaissance, along with Florence. The current-day version of St Peter's Basilica was built and the Sistine Chapel's ceiling was painted by artist Michelangelo. Famous artists and architects, such as Bramante, Leonardo da Vinci, Bernini andRaphael resided for some time in Rome, contributing to its impressive Renaissance and Baroque architecture. As a modern city, it has been capital of the unified Italy since 1870, and grew mainly in two periods either side of World War II. As it is one of the few major European cities that escaped the war relatively unscathed, central Rome remains essentially Renaissance and Baroque in character. Rome has had an immense historic influence to the world and modern society over the ages, particularly during ancient times, mainly in subjects such as architecture, art, culture, politics, literature, law, philosophy and religion.

Modern Rome is a bustling cosmopolitan metropolis, and is Italy's capital of politics, economy, and media. Rome is a city rich in history, art and culture, and the vastity of its priceless monuments and treasures lead it to have many UNESCO World Heritage Sites.

Picking you up at Civitavecchia port at 08.00 a.m., we will drive you to discover the "Lazio Region" Old Etruscan Area, going to Tuscania.

Tuscania is a nice, small, little town located 1 hour North East of Civitavecchia, at the border between Lazio and Tuscany Regions. Surrounded by medieval walls, was originally built by the Etruscans.  Some of the most beautiful churches in Italy are in Tuscania, including San Pietro and the magnificent Santa Maria Maggiore. Tuscania is an ideal combination between the present and past. It is not uncommon to find a medieval section of wall in the wine cellar of a modern restaurant or an Etruscan tomb used as the basement storage area of an apartment. The strong connection of the locals to their traditions, history and folklore greatly influences the unique nature of the town. You will be able to visit its interesting Etruscan Museum, its simple but enchanting churches and walk in its narrow streets surrounded by stone buildings, old roman road ruins and medieval churches.

From Tuscania, we will drive to Tarquinia, another interesting Etruscan Town where one of the 7 kings of Rome, the Etruscan Tarquinius Priscus was born: will visit the largest Etruscan Necropolis (Tombs) (tkt cost not incld), where you will have the possibility to discover the burial places of the pre roman civilization. Then we will drive you to a Farm House, where you will have a local, typical lunch (not incld).

Tuscania is a hilltop town located on the borders of the Tuscany and Lazio regions of central Italy, south of Florence and not far from Rome, in the breathtaking countryside of the southern Maremma. The countryside surrounding the town forms part of a nationally protected nature reserve, and has one of the richest collections of archaeological remains in the world. The town is strategically positioned for quick trips to the beach, to volcanic lakes and hot springs, as well as for visits to the nearby towns of Viterbo and Tarquinia. The central location also allows for easy access to Rome, Florence, Siena, Pisa and Assisi for day trips.

Tuscania has been admired for centuries for its picturesque setting, dreamy landscapes, medieval walls, cobbled streets and fine culture and food. Filmmakers such as Pier Paolo Pasolini, Orson Welles and Franco Zeffirelli have chosen it for their films, while the town has inspired many artists, painters, photographers and writers. In the last few years Tuscania has also developed a reputation as a center for new forms of contemporary expression and modern art: its vivid cultural life is represented by an active calendar of festivals and exhibitions. 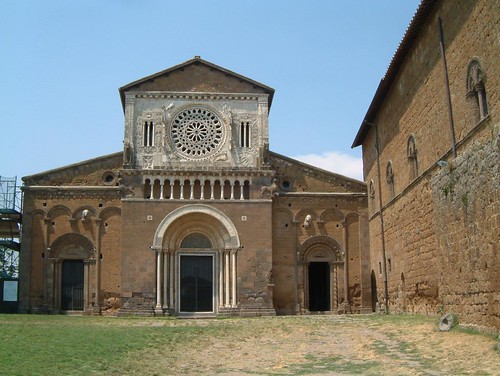 On the coast, near the Etruscan ‘Porto Clementino’ (Port of Clementine) are the ruins of the Etruscan Emporium ‘Gravisca’. There are important visible remains of a cult ritual site erected in 118 BC on the foundations of a former Etruscan settlement. Located on the edge of the Roman Colony, the sanctuary was a place of worship as far back as 600 B.C. by the Etruscans and later by the Romans. The buildings were divided into a variety of shrines dedicated to Etruscan and Greek divinities.

Just 45 minutes drive from Civitavecchia Port, will arrive to Ostia.
Your driver will take you to the entrance of the ruins where he will help you for buying tickets and you will have the possibility to hire an Audio-guide (If available).

After the visit which usually takes 2 hours your driver will take you to visit Julius II Castle, old fortress built in front of the old roman town.

From here, we will drive you to the beach where you can enjoy a fantastic seafood lunch (not incld.) in a typical restaurant on the water.

After lunch, time for shopping and drinks at outdoor cafes, will drive you back to Civitavecchia Port.

In the Roman Republican times Ostia was Rome's main commercial port and a military base to defend the coastline and the Tiber entrance to Rome.
The port continued to flourish under the Empire, despite of the development, of Portus, a new port slightly to the northwest, in the 2nd century AD. Ostia's decline began in the 4th century, when a reduction in trade was combined with the gradual silting up of the harbour.

Then malaria became endemic in the area and the city, whose population may have been nearly 100,000 at its peak, was totally abandoned. Buried for centuries by sand, the city is remarkably well preserved.
The site is less spectacular than Pompeii or Herculaneum because Ostia died a gradual death, but it gives a more complete picture of life under the Roman Empire.
People of all social classes and from all over the Mediterranean lived and worked here.

Interiors of our vehicles!